Our research is pointing negative returns for the equity market in the months ahead. We believe that we are in the initial stage of this bear market and the high we saw in September 2018 will be the high for 2019 too. There are few things that make us bearish.

We are seeing high-yield ETF make new 3 month high but high-yield funds are not participating in the rally with the same strength. This tells me that the currently rally is due to fear-of-missing-out rather than due to fundamental improvements. There are several sectors that are flashing warning signals.

As you can see in the charts below, in February 2019, we saw high-yield ETF make a new 3 month high but high-yield bond fund was unable to make a new high which tells me that this rally that we saw in 2019 may be coming to an end soon. There were 2 other instances when the bond-fund’s last signal was “sell” and the ETF gave us a “buy” signal and those signals turned out to be false. 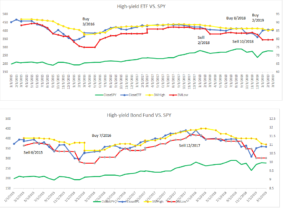 Before we look at some other indicators let’s look at what happened in 2007 when high-yield funds and high-yield ETFs both went up or down at the same time.

In the charts below, you will see that both managed to get below its 3-month low in 12/2007 and both of those did not go up till 5/2009. Have we followed the signal we would have been completely out of the market during the bear market of 2008. SPY was at $136 in 12/2007 and by the time we got a buy signal in 5/2009, it was trading at $92.50 which is a decline of 32%. It is important to know that not all models give true signals all the time but when our model have given us a false signal the downside is very limited. On 5/2010 both the models gave us a sell signal when SPY was at $109 and the next buy signal was on 9/2010 when SPY was at $113. In this instance we missed out on 4% gain. Historically there have been 10 signals since 2001 and the average gain is 32% where as the average loss is 6% and the signals have been correct 70% of the time which provides us with great odds. (Click on image for larger size) 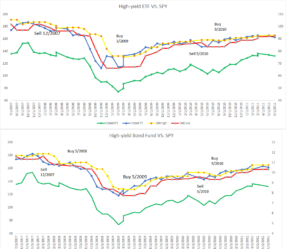 As you can see from the chart below S&P 500 is not able to keep a sustained rally without lumber prices/companies participating in the rally. Lumber prices made a high in May 2019 and was in a free-fall by September 2019. September 2019 happened to be the high for S&P 500 too. (Blue line is S&P 500 and Black line is lumber company). 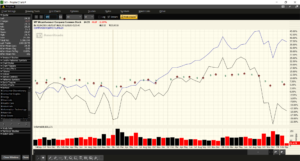 The chart below is the ETF that tracks global shipping. It has to perform well for us to have a sustained bull market. Recently we saw it make a high in early 2018 and it has gradually declined and I believe that this combined with all the other factors that I mentioned earlier will take the market down. 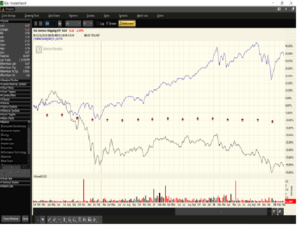 What we are seeing right now is something similar to what happened in 2001 and 2007, when it is all said and done, I believe the market will be down 40%. Markets usually do not go up or down in a straight line so whether we are bullish or bearish it will have counter-trend moves. In Q4 2018 we saw one of the worst quarters since the bull market started and it has rallied very strongly in the first two months of the year.

The main thing to know here is that many of the largest gains have come in bear markets so what we are seeing right now is very normal. I will be taking this rally as an opportunity to sell few holdings at a better price and hedge part of the portfolio. We had a great 2018 as we may be one of the few people that was up in 2018 when S&P 500 was down. I am expecting 2019 S&P 500 returns to be worse than 2018 so my current goal is to protect what we have.